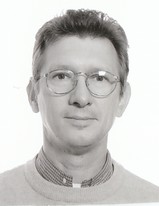 Born in 1958 in Leuven (Belgium), Philippe Bogaerts attended primary school and first college years in that old university town. After moving to Germany, in 1973, he finished college in Düren.
He then started his veterinary training at the Catholic University of Louvain from which he gained his Bachelor degree (with honors) in 1979. He graduated, as veterinary surgeon (Docteur en Médecine Vétérinaire), from the veterinary faculty of the University of Liège in 1982.
After 13 months of mandatory military service in the Verterinary Services of the Belgian Army Health Services, located at the General Headquarters in Evere, he was discharged with the rank of Veterinary-Lieutenant (Réserve).
From 1984 to 1987 he was employed in a small animal practice in Malaise, near Overyse (Flanders,Belgium). After these three years he joined, as a partner, a colleague in Limal, near Wavre (Wallonia, Belgium), to start a private practice dedicated to small animal medicine. This collaboration still holds for more than 24 years now. His partnership is mostly oriented towards reproduction and breeding management.

In 1986, during a congress in Paris he met Dr. Priscilla Stockner who was running a canine sperm freezing company in the USA, called “The Canine Cryobank”. This meeting was the starting point of his ever growing interest in canine and feline reproduction. In 1987 he traveled to Los Angeles (USA) to take part in a training course on canine sperm freezing and insemination. He thus became the first European licensee of The Canine Cryobank.

In 1988, thanks to Prof. David B. Morton (University of Leicester) his interest became focused on timing the insemination of bitches with the help of progesterone levels. A small spin-off from the University of Cambridge, called Cambridge Life Sciences (CLS) had indeed developed a progesterone ELIZA test, still known today as “Ovucheck”, initially designed for progesterone assay in cow milk or plasma. After initial testing , Philippe became also the first Belgian vet to offer in-house progesterone measurements to breeders in order to enhance their breeding performances.

Meanwhile, in 1988, in Dublin (Ireland) the very first meeting of the International Symposium on Canine and Feline Reproduction took place of which Philippe was the only belgian delegate.
Since the beginning of 1996, together with Prof. John Verstegen (University of Liège), he becameclosely involved in the first meetings with European colleagues concerning the creation of an European scientific society dedicated to small animal reproduction where academics and practitioners could meet and exchange their experiences, resulting finally in the development of the EVSSAR.

Member of this Society from the beginning, he was elected on the Election Committee, then on the Board in 2004 and served , on the Executive Committee, as Secretary until 2010.

Philippe and his wife, Chantal, have three children.